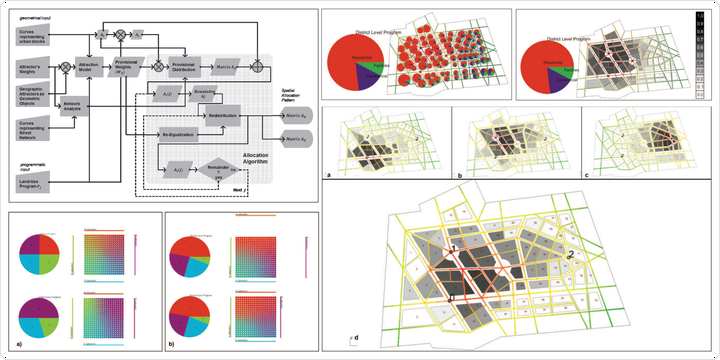 Urban density distribution and mixed-use allocation patterns are considered to be affected primarily by the inherent spatial structure of urban neighborhoods and the geographic attractions of the district that affect people’s choices in movement and settlement. The space syntax theory (Hillier, Space is the Machine, 2007) clearly relates the configuration of urban grid to urban functioning in terms of its effect on the distribution of densities, allocation of land uses such as retail and residence: “Land uses and building density follow movement in the grid, both adapting to and multiplying its effects.” (Hillier, Space is the Machine, 2007, p. 127). It states that a spatially successful city is characterized by the “dense patterns of mixed use”, which are mainly settled as a consequence of movement, which is itself brought about by the grid configuration (Hillier, Space is the Machine, 2007, p. 4). Yet, space syntax theory is merely analytic per se and does not provide any means for ‘designing’ “spatially successful cities”; besides, it does not consider the geographic idiosyncrasies of places and their gravity-like ‘attraction’ effects in its models of movement patterns; and thus their effect on mixed-use allocation patterns. It is explicable that in vernacular settlements and in old harmonically grown cities we find a close correspondence between spatial configuration, geographic idiosyncrasies, density distribution, and mixed-use allocation patterns. However, it is important to know how to develop or change new settlements in such a balanced way. The inherent mathematical complicatedness of the abovementioned patterns, their interrelations, and their fundamental importance in the functioning of a city fully justifies the use of computation for supporting design and decision-making processes. This paper introduces a computational design methodology that relates the urban built-space density distribution and mixed-use land allocation patterns to network configuration and geographic attraction effects, guaranteeing that mixed-use allocation both complies with regional plan and local features. The proposed methodology embraces an inter-subjective understanding of place into the computational design process and combines it with the objective spatial measures such as centrality, integration, and walkability. The computational design approach presented in this paper is an effort for merging the split fields of urban planning, spatial analysis, and urban design. The computational methodology introduced in this paper is implemented within a tool-suite of computational methods for network analysis, built space density distributions, functional allocation techniques, weight/charge handlers, and equalization methods that guarantee the consistency of design alternatives with analysis results.