In book; Geospatial Data in a Changing World, Jan 2016 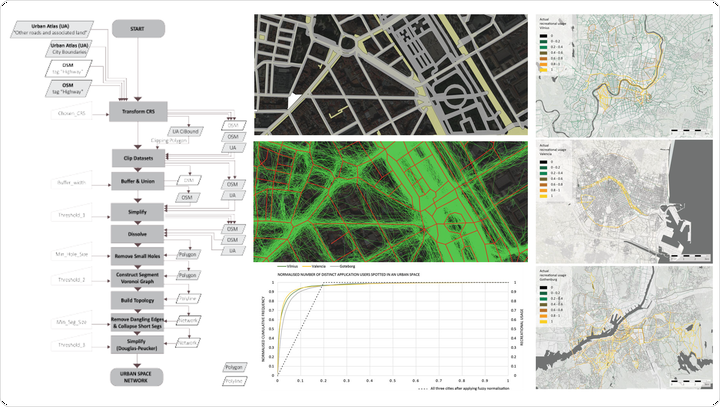 The paper presents a workflow for collecting, structuring and processing geo-referenced recreational mobility data from a sports tracking application as to monitor recreational usage of urban spaces. The data collected include GPS trajectories of people walking, jogging, and running for recreational purposes in European cities. The presented workflow includes systematic steps for aggregating the trajectories and attributing them to a spatial network model called Urban Space Network. The nodes of this network are the navigable spaces or streets and its links are the connections between them. A method is proposed to find a fuzzy notion of recreational space usage, using the number of distinct application users whose trajectories have been accounted for the space in question. The fuzzified space usage values are then attributed to the nodes of the network. This model can be primarily used to observe actual patterns of space usage and has the potential to be used as ‘ground truth data’ for validating and calibrating network-based models of recreational mobility. Patterns revealed by the workflow can be used to study where outdoor physically active mobility happens and where it is absent. Thus the proposed workflow can provide spatial and objective insight useful in planning, management and governance of cities in promoting active mobility that is already a rather global trend in urbanism.